I mentioned last week that I signed up for a test drive. Following their instructions I turned up 15 minutes early for my 10am apt. It being a store in the mall though, they generally don’t open before 10am so I think there’s some confusion around that first slot for the day. They did open a few minutes early and collected my drivers license information. They only confirmed the car I currently have and then we headed off to the car. The Natick, MA store has 6 bays in a garage near JC Penny. Normally we would have walked through JC Penny but the store was closed so it was a bit of a detour around it to get to the cars. Evidently any Tesla owner can use those bays at any time to charge which is really nice, its walking distance from my office and something I hadn’t considered. I can save some home electricity charges if I plan things right.

The picture below shows the 3 cars that were there, 2 test drive cars and one owned by one of the Tesla employees (far right): 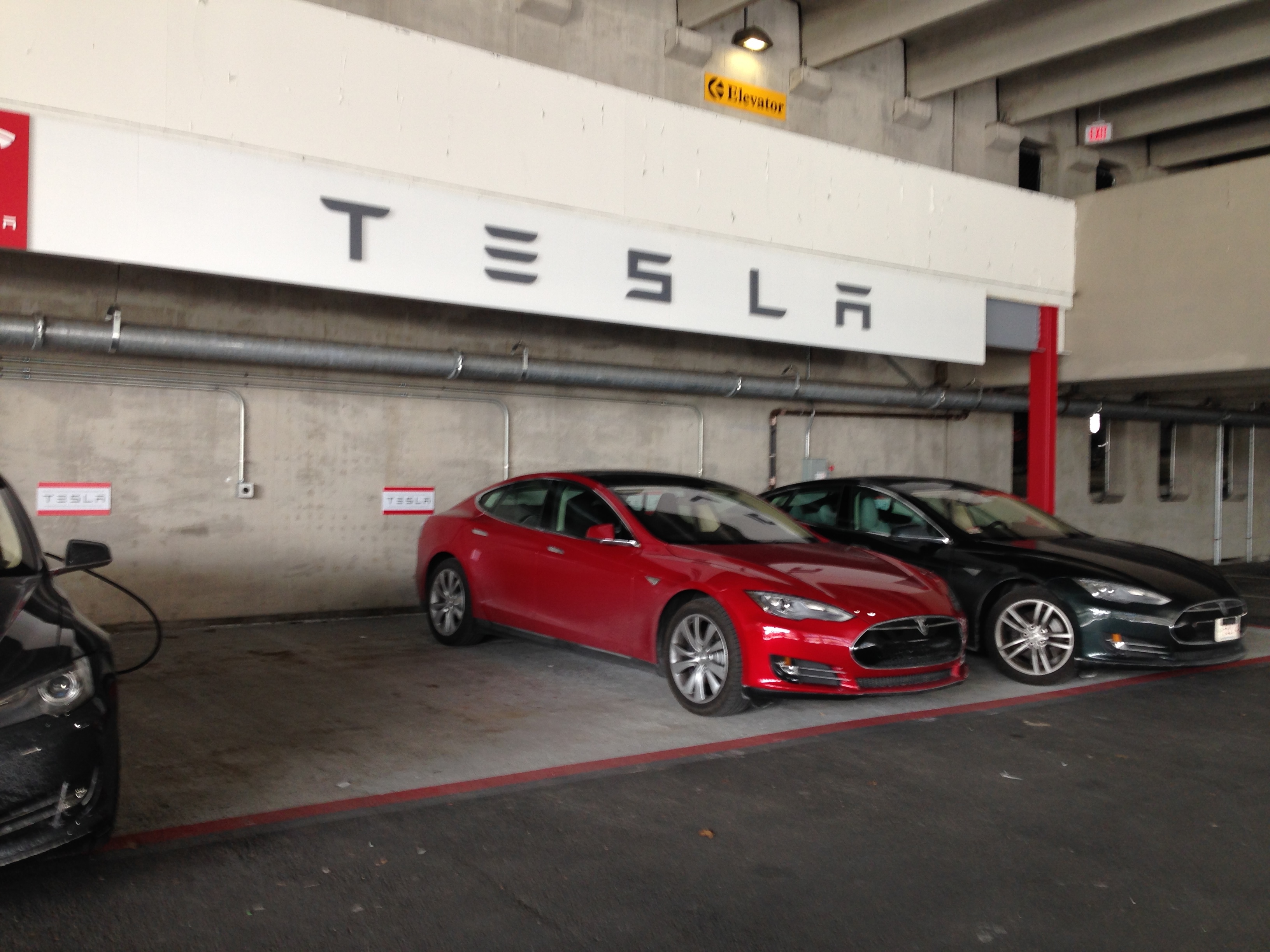 I test drove the red one which was a 60 kWh battery version. The sales guy said the weight/handling would be similar to the 85kWh version I was interested in since they pad the missing battery cells with equivalent weight. The car had the parking sensors on it (good since I wanted to see/test those) and the air suspension which I would have preferred not to have on the tester since I wasn’t interested in that option. It had the panoramic sun roof too which was good to see and the tech package. Other than the suspension and the battery capacity it was pretty close in features to what I was thinking about.

We spent a bit of time looking in the trunk and front trunk (frunk), folding down seats etc. Some interior spaces haven’t come out well in pictures online so I wanted to look in the nooks and crannies. Evidently the cargo net in the frank was free/included in the early cars, now I see it listed for $20 online at their site, so I think its not included any more. As I expected there was a lot of space but little interior lighting for it which is pretty well documented on the forums. He showed me the charger/connector and disconnected it and put it in the trunk. He said for people charging at home, if they’re just doing day trips within range they usually just leave the mobile connector at home. An extra one is $650 which, next to the price of the car, isn’t too much but i’m hoping its not needed.

Next we got inside and went through the all the features on the big touchscreen. It looks great online and in the videos, but even better in person. The screen is really sharp, the options etc are very responsive. Otherwise the features are pretty well documented and work as you’d expect from the videos online.

We didn’t go over the display in front of the driver much before the drive but I did change some settings a bit as I drove along. I thought there would be a few more options there but it seems those mini “applications” are pretty limited right now, room for growth I guess. Not sure what else i’d want but just had the impression it was limited. He said there was some way to control the sunroof from the steering wheel controls but he didn’t remember how. I short circuited a lot of the standard demo speech since I had done a lot of reading/viewing before the test drive and was pretty well informed.

The test drive was out of the mall parking garage, onto the Mass Pike (I90), then back along Route 9 East and back to the garage. A few impressions from the drive:

At the end of the drive he asked me what the main impression I had from the drive was, and I said how quiet it was. Its very different to drive a car that makes basically no sound.

I really enjoyed the drive and the sales guy was very knowledgeable about the car. I had a few questions going in that I hadn’t really answered online yet, they’re here in case anyone else wonders the same thing:

That was about it for the test drive. When we were done we went into the showroom to talk options and choices. I’ll cover that in my next post.

3 thoughts on “The test drive”