Driving a Tesla is 38% of the cost of driving a comparison gas-powered vehicle despite with crazy electricity prices in Massachusetts. But unlike oil and gasoline, you can generate your own electricity for some solar gains, offsetting some of that cost while also taking load off an already maxed out electric grid and doing your bit to reduce consumption of our planet’s limited resources. The downside is that this will increase your electric bill proportional to how much you drive. For example, if you drive 100 miles a day your electric bill could double.

After ordering my Tesla Model S I started looking into solar cells for my home. I only looked at a single provider, SolarCity, for a couple reasons. First, SolarCity is dominating the market at over 19% market share. Second, it’s associated with Elon Musk and through him Tesla (evidently his cousin is running it as he didn’t have time to run with the idea with both Tesla and SpaceX already going). Going into things I didn’t know much about their business model or approach — I just filled out a contact form online and took it from there.

The process starts with a qualification call by an inside sales person. They ask you about whether you own your home, what your electric usage is like, if you have a condo association and some other things. The more interesting part was them pulling up your address with google maps and seeing if you qualify for solar. That part was tricky since Google maps shows my house about 100 house numbers from where it really is so it took some talking through to get them to the right spot. Here in Massachusetts they say only 1 in 7 (14%) of homes qualify for solar. Disqualification happens for things like not enough space on the roof, too much tree coverage, wrong facing roof lines, etc. Most of that disqualification happens on that first call which lasts about 5 minutes. Once qualified they ask you to retrieve your power usage for whatever period you can get from your power company and send it to them. There’s some more qualification on that, mostly commercial vs residential, but that’s about it.

The next step is for the sales rep to arrange to come visit your property. The appointment was scheduled for 2 hours but ran over. I thought there was going to be more visual inspections/measurement but it was a lot more google maps work as well as using a custom application they have (on Windows, yuck) to plan the install. This could all have been done over the phone with a WebEx saving time and money for them. I had some complexities in that I have 2 meters and 2 property pieces to work on but i’ll focus on just one and the basics. The rep found our preferences in terms of placement (i.e. none on the front of the house for looks) and then filled the remaining qualified roof area with solar cells. Some has some shade or doesn’t face the same way. The process is bringing up a google map image into their custom software then using a Microsoft Paint-like tool to paint in the solar cells. The painting part wasn’t very well done for the application but the results and analysis it spits out are. It comes out with measurements, numbers of solar cells, estimated production, which cells will be more productive (due to shade), etc. Quite an impressive report at the end.

After that, my actual usage history was used to calculate the annual target kWh and to enter the current price per kWh I am paying to the provider. With all that in you get some interesting information. First the estimated system size versus the target size to cover 100% of your electric usage in the year;

Then they use past experience in your state/area for weather patterns, actual results etc. to map that over the year in terms of generation and estimate how much real coverage you will get: 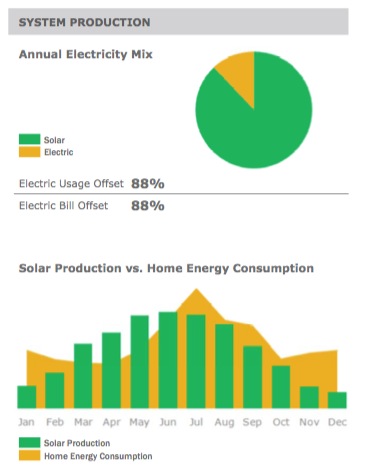 So from the above the estimated system will cover 88% of my electric needs. They show nice charts showing how this translates to dollars with an average bill of $377 dropping to an average bill of $45. When the green line above is above the yellow you’re producing more than you need and your provider is building up a credit for you in your account. When its below the yellow you’re using more than you produce and using up credits then paying your providers rate. Under no circumstances will the provider send you a check for the credit (again potentially state specific). This big drop in what you’re paying the provider is the “bait” portion of the sales pitch. Lots of focus on the energy costs and reduction — but this doesn’t all come for free.

The system designed for our house costs about $144,000 in total. With green credits the price is more like $68K. They don’t give you $68K of hardware for free.

“Take dollars going to power companies and divert most of it to SolarCity while proving the homeowner enough incentive to do so.”

SolarCity provides free hardware to you to generate solar power and then charges you a rate based on the amount of solar power generated. The solar power generated and put back onto the grid offsets your electricity usage and bill, but can never exceed (at least in Massachusetts) the bill to the point where you are paid for generation. In other words, you want to get as close to 100% coverage of your electric bill for the design without going under or over significantly over the long term. Going under means you’re paying the higher price per kWh (provider vs SolarCity), going over means you’re paying for excess generation of power with nowhere for it to go (in other words you’re giving free electric to the power company that has ripped you off for years). SolarCity does not want to sell you a system. They want to enter into a long term (20 year) agreement with you to buy generated power from the equipment they put on your home. They provide a few options to do this:

All the above rates start lower than your current electricity rate. For us thats 16.7¢/kWh. To give an example, take #1. The quoted rate for generated power is 14.8¢/kWh. So now lets look at how that works for a month where you use 2,500 kWh:

The 88% number above is from the estimated electric usage offset from their report. This number can vary when you get to actual implementation but the rep said the estimates are usually conservative.

So the no-cost option (#1 above) is a 10.5% savings immediately. Thats a whole lot different than a 88% savings. The power company was getting $417.50, now they’re getting $48. SolarCity gets $325.60 that used to go to the power company. SolarCity and the homeowner win, the power company loses revenue but gets relief on the grid, more relief during the hotter/sunnier months when they need it. At 14% of homes eligible I don’t think this is a major threat but its an interesting dynamic.

But wait, the analysis isn’t over yet. Electric companies are hiking rates year over year. The rep quoted an average of 4.8% annual hike in Massachusetts. This means the benefits of the system get better each year you have it. More so on the fixed rate plan, but even with a 2.9% increase the gap spreads over time. I didn’t know if I believed the annual increase estimate so I went back through my records and found my average cost per kWh each year since 2008: 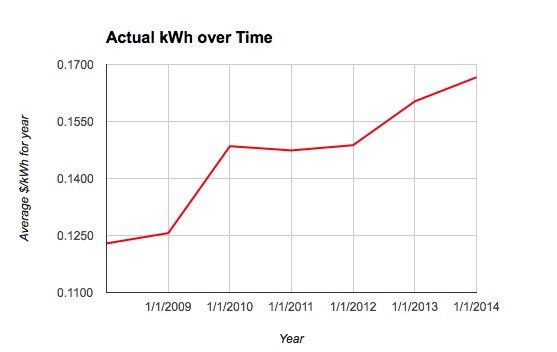 This represents an actual average annual increase of 5.7% since 2008 for me. Using that average and the fixed rate with SolarCity and doing a similar calculation to the above for a point 10 years from now shows a 40% savings in the cost of energy — not over today’s prices but over the prices 10 years from now if the power company does what it has been doing over the last 6 years. The benefit of solar is marginal to start with but builds over time.

Increasing gains over the long term

The choice for which plan you chose depends on how long you expect to stay in your house. If you’re only staying for a few more years, go with the one with the lowest rate and no upfront payment. If this is the last house you’ll own and you can afford to, then pre-pay. Otherwise (like me), go in the middle. The break-even point between plan 1 and plan 2 is 8 years and was created that way intentionally by SolarCity.

Next to note is that for my system with an estimated production of 23,830 kWh per year with a fixed cost to me (for the fixed rate plan) of 14.8¢/kWh the total payout to SolarCity is $70.536.80. The estimated cost after credits is around $68K so the payments are paying for the entire system over that 20 year life.

At the end of the 20 years there are a few options:

There are a few other things to note:

So they provide at least 10% benefit without any upfront costs or risks and the benefits grow over time and at the end you can get back to the same house you had before without any costs or damage. Why wouldn’t you do it?

I started down this path because of the Tesla. I’ve averaged 90 miles a day over the last 6 months in my ICE car. Using Tesla’s calculator thats 29.7 kWh/day or 10,841 kWh/year i’ll use which is a 45% increase in my usage (unless I find free public charges and the like) which will increase the gaps and benefits of going Solar. The funny thing is the rep didn’t comment when I initially thought adding the Tesla wouldn’t impact my usage much. They should really be better versed and I should have done that piece of my homework up front. That means my system design has to start over for my new target generation number.

For me with the analysis going solar is pretty much a no-brainer. Cleaner power, less cost, no upfront fees, no upkeep i’m responsible for and it will help offset the additional cost of electricity from my new Tesla. Sign me up for Solar Gains!

This article originally appeared on Teslarati.