By now I was hoping to be reviewing the Navigation updates that Elon has been promising are coming in the 6.0 firmware update for the Model S. But after watching 5.9, 5.10, 5.11 roll out over several months without the NAV updates we may be living with the current system for a bit longer. The current NAV system is not bad and does have several great features to it, but it could be better and is below par for the industry in several areas.

Tesla’s navigation system is below par for the industry in several areas, but it does have several great features. 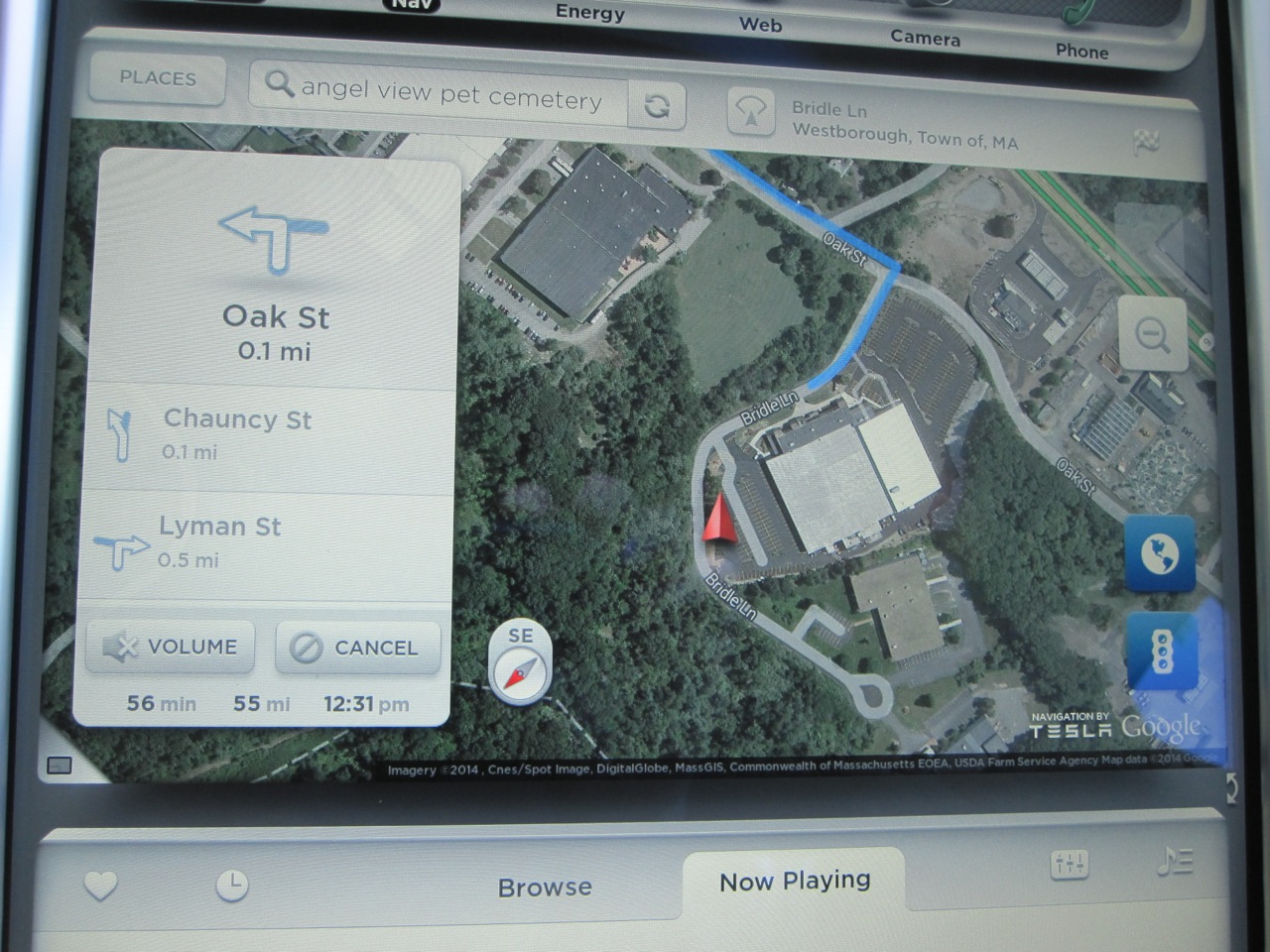 The most obvious and frequently pictured portion of the Model S Navigation system is on the 17″ screen where the map can be shown in either half screen (huge!) or full screen mode (mind bending!).

In half-screen mode you can put the map on the top or the bottom of the display. I prefer the map on the top as it keeps the map closest to the windshield and my eyes have to travel less distance from the road. I don’t find the map distracting and for me the viewing height in this position is very reasonable.

The map shown is a Tesla-modified and co-branded version of Google Maps. As you’d expect you can zoom in or out by pinching/reverse pinching or with the +/- icons. You can also drag to move the map around, you can twist to rotate the view and otherwise interact with the map. If you’ve used Google Maps on a tablet or smart phone its very much the same experience and the way maps should be experienced. Try moving around on a map with the arrow keys or big dial on a Mercedes or BMW. Those systems are tiny and archaic by comparison.

Tesla’s map is the way all maps should be experienced.

Like Google Maps, the Tesla version offers both satellite and regular map views. Press on the globe icon and you get a satellite view. This is really cool for exploring areas or understanding your terrain better. The maps are a little more sluggish in satellite view but are are generally only painful when you’re moving quickly and the map is zoomed out. One trick is to set the map in north up mode when in satellite view to reduce the number of screen updates and improve performance.

Set the map in north up mode when in satellite view to improve performance.

When in heading up view an extra compass icon appears on the map indicating which way is north. You can also tap that icon to switch back and forth between heading up and north up views.

Also like Google Maps, there’s the ability to show traffic along your route. With the stop light icon clicked your streets will be overlaid in green, yellow and red (and solid and dashed) lines indicating how bad the traffic is. Thats a useful visual guide, but unfortunately thats the limit of the traffic interface on the Model S today — more on that later. 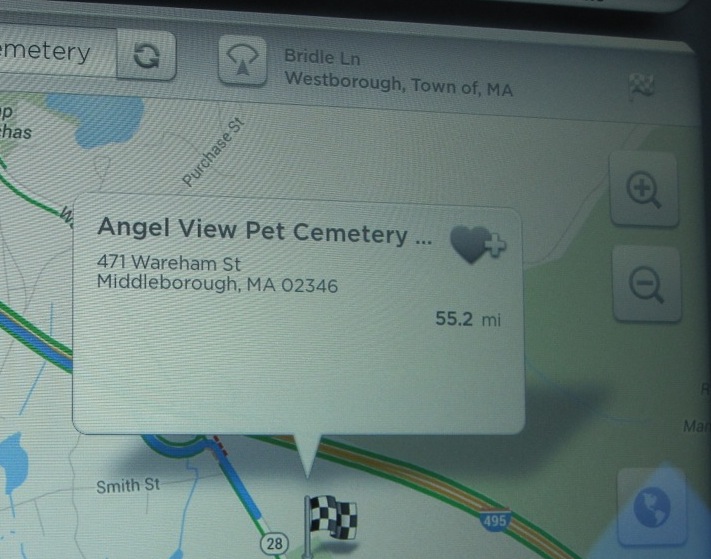 At the top of the display are a number of controls:

In the settings area, under Apps/Maps, there is exactly one setting related to the map — “Map Magnification” which has a 1x or 2x option.  When you have it set to 2x it lets you zoom in twice as far as 1x – in other words at maximum zoom things are twice as big on screen.

For those that have the technology package (about 85% of owners), when navigating, a popup navigation display comes on top of the map on the left side. This can’t be hidden, but the directions that are shown are scrollable — just drag your finger up and down on the directions and you’ll see all your turns.

While related to the Navigon system below, this pop up turn guidance is also where you can control the volume or turn voice navigation off if you don’t want the helpful voice telling you about each turn to take. Unlike other systems, there are no levels that you can set for voice directions other than volume — its all or nothing with the Model S. This is also the area where you can cancel navigation.

At the bottom of the box is the remaining distance, time and estimated time of arrival (ETA) at your destination. These numbers do not take into account traffic and no information is shown relative to your destination and your range — you’re left to do that math on your own.

Voice guidance is all or nothing with the Model S.

Note that there is no option to control the display points of interest (POIs) on the map.  The only POIs they display are for super chargers and for locations you’ve used previously to charge. Tesla makes up for that with an excellent search interface which we’ll cover later but I always enjoyed being able to display POI categories on the maps in my cars in the past. 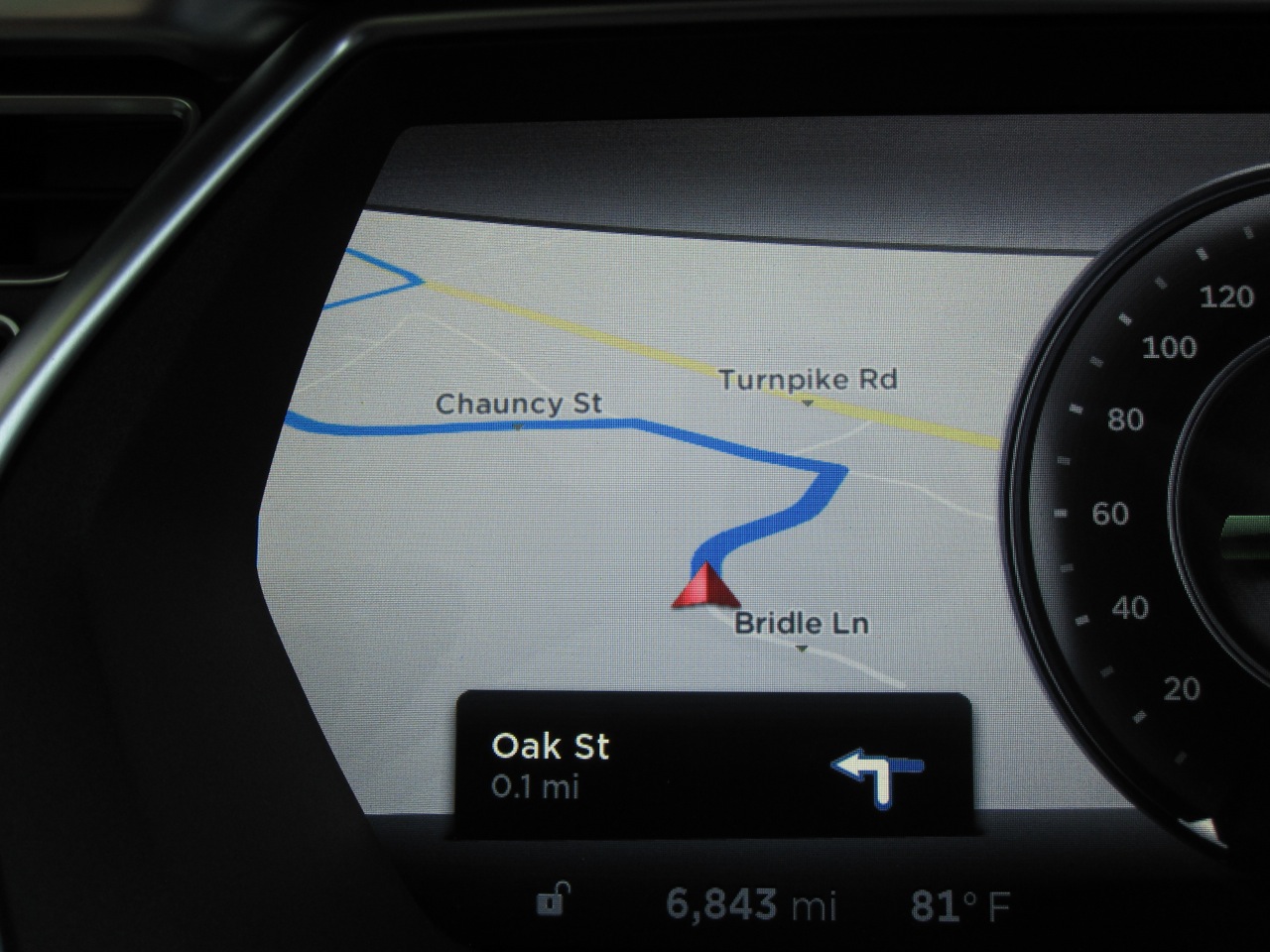 With the Model S, Navigation comes with the technology package. Without the package you get the Google maps part, but you don’t get the turn by turn directions or voice guidance. Google maps only work when your car has internet connectivity (wifi or the built in cell service) so if you go out into the wilderness you could get lost. The technology package brings in a second navigation component, a version of Navigon by Garmin licensed by Tesla, that can produce directions and maps even when there is no network connectivity.

When you have a destination entered (more on that process later), a second display becomes active automatically on your dash served by the Navigon component. This is a small section of a map that shows your route with turn by turn guidance. There’s absolutely no control over this display — there are no preferences related to this display, you can’t zoom in or out and you can’t even stop it from popping up on your dash. Once the display is up (always on the left side of your dash), you can switch away from it to another display (like Media) but next time you start navigating somewhere it will pop back up again.

This second display is pretty quirky. At times the graphics, fonts and other items can look dated or poorly done, and at other times you’ll see graphics that don’t make a lot of sense or look like they were incomplete. Then every once in a while it will surprise you with great images. Generally I use the 17″ screen more for my turn information than the dashboard one. Fortunately so far the two guidance systems have both provided identical results — it would be a real mess if they gave different recommendations.

One thing I really like on the Navigon display is the way they do exits. They make an exit sign that is pretty darn close to what you’ll see at the exit with a bunch information on it: 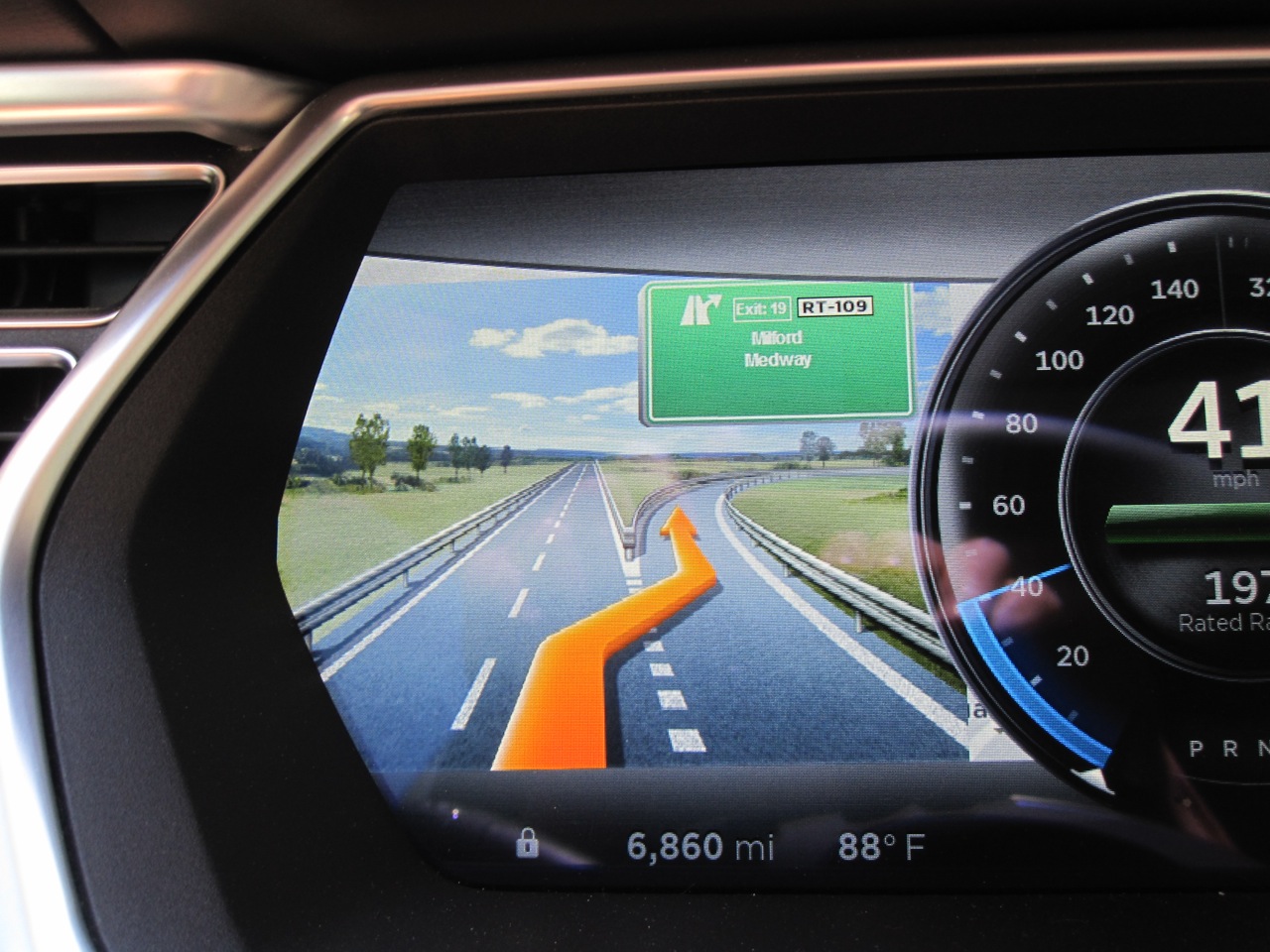 They even have different pictures for day vs night. If you look closely at any of these special exit displays you’ll notice that the image is actually an overlay on top of the navigation map. Look in the top left, top right or bottom right of the display above. The images are rectangular but the map fits in the odd Tesla curved space so you get some quirky edges around these displays. Also, the image underneath is active and moving. That seems unfinished to me but it’s a minor nit.

One of the more quirky displays is related to telling you how many lanes are going straight versus veering off when your directions are to continue straight. 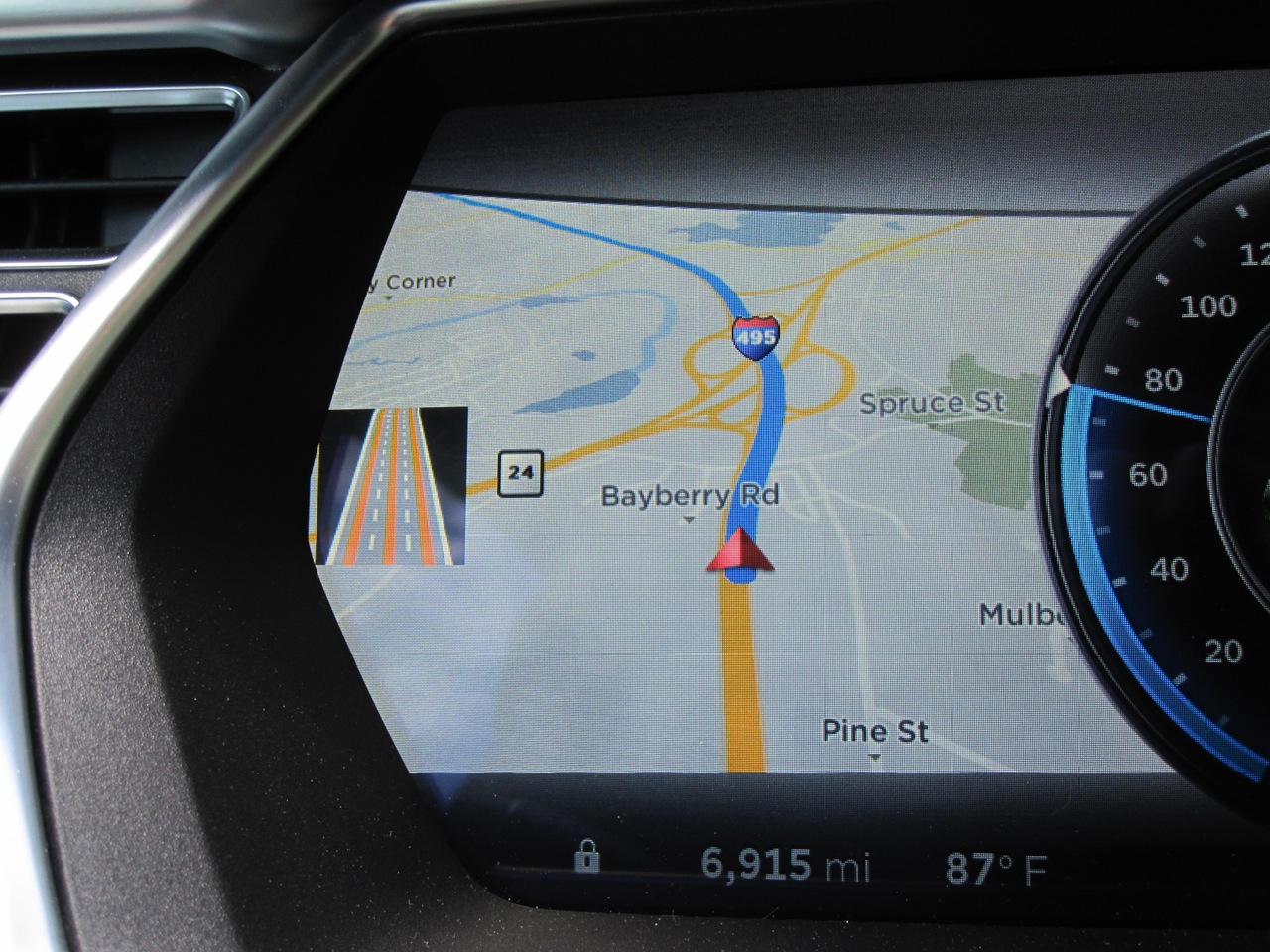 The graphics and impression are underwhelming and the way this little image pops up and goes away also looks incomplete/flawed at times. If I could i’d disable it. 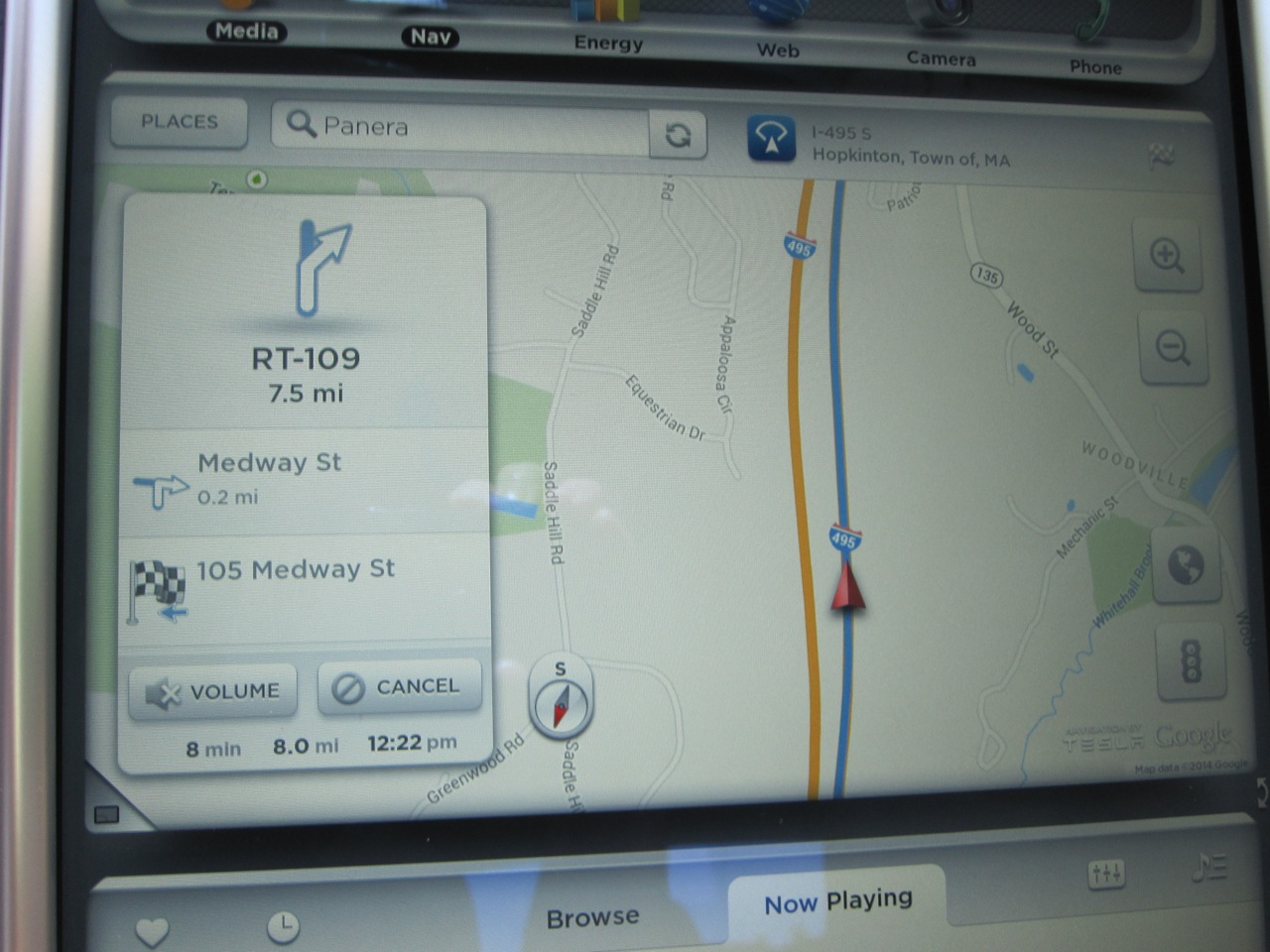 The maps on the 17″ screen and how you interact with them are best-of-class. They’re pulling from the immense and constantly-updated Google maps database and have a wealth of information. There’s no other car on the road with this size or quality display or a map that you can interact with in a natural way.

The maps on the 17″ screen and how you interact with them are best-of-class.

The turn-by-turn guidance map is less than what you’d get if you bought a $100 Garmin or other independent GPS system. You have less control over what it displays, the images are poor at times, and its just generally inferior to an independent guidance device.

Combined together you have a decent system that works well together for displaying map and route information. There are notable gaps in areas like POI display and control over display options (like when that dashboard guidance pops up or what it shows). The odd thing is that the Navigon engine is capable of a lot more than Tesla has enabled so perhaps we’re only a few software updates away from some improvements in this area. I do know that the turn-by-turn visual guidance in my friend’s Mazda 6, a car 1/3 the cost of my Tesla, is much more impressive.

Overall the map and guidance displays are better than what i’ve had in the past and long-gone are the days of buying a “Map Update DVD” for $250 just to get an already stale map update. Tesla’s real challenge comes in the area of navigation control and guidance which i’ll cover in the next post.