I’ve been thinking about buying a few Tesla accessories for a while and I finally broke down and bought them. I got a second Universal Mobile Connector (UMC) and a Tire Repair kit and I wanted to cover the reasons behind the purchases.

I’ve mentioned previously that I work near the Tesla store in Natick. They have 2 HPWC’s and 4 NEMA 14-50’s available for free charging. As you’d expect the HPWC’s are in higher demand and are less likely to be available. While I have a lot less range anxiety than I did before ownership, it’s still a great option to be able to charge walking distance from work. I also recently had to use this option for my NJ road trip.

I’ve heard its not great for the NEMA 14-50 connector to plug/unplug it daily. I also don’t always know when I’ll need some extra range. It would also be annoying to have to unplug and roll up and store the cable daily. So I broke down and bought a second UMC.

Some people in the forums suggest getting a HPWC for home for just this reason so you can use your factory-supplied UMC for travel and use the HPWC at home. But I didn’t do this for a few reasons:

I feel a lot better about having a UMC with me at all times and the new one has worked great. 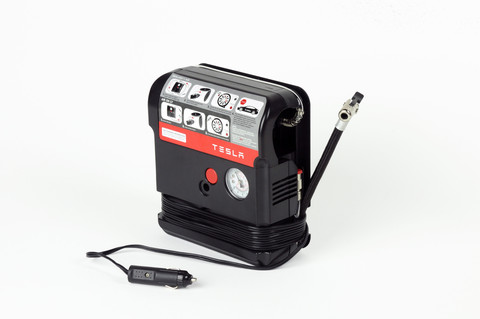 I really didn’t want to buy one of these. Tesla only wants you to use it if you can’t get Tesla service to where you are in a reasonable time period as the junk that goes into the tire can be a pain. But if you’re quite a ways away from where Tesla can reach it can come in quite handy in a pinch.

What pushed me over the edge is I have a slow leak in my right rear tire. I’m losing about 10 pounds per week and it had me a bit nervous about my (then) upcoming NJ road trip. In addition to fixing a flat it is also a normal tire inflator so I figured even if I never squirted the junk into my tire I could at least inflate my tires with it.

I did some research on other fix-a-flat type products and the higher end ones are very similar to the Tesla one and a little bit cheaper. I went with the Tesla version due to concerns about coverage for the TPMS (tire pressure monitoring system) sensors and making sure I wouldn’t get grief from Tesla after using someone else’s fix-a-flat product with them. The price difference wasn’t huge and I have peace of mind.

A couple things to note on the tire repair kit. I found it hard to wind the cables back up the way it came so its not as neatly bundled as it was originally. I also found the metal around the pressure hose that connects to the tire valve to be poorly constructed – it doesn’t look like it will last long.

For a non-Tesla accessory, I bought an Amazon Basics electronic tire gage. I like to see the actual numbers and this one lets you set the target pressure which is nice. It came with a nice case worked great for about a week then died. I wouldn’t recommend it at this time.

I had the opportunity to use the repair-kit for inflation only with the tire gage while on my NJ trip and both worked great. I’m coming due for another tire rotation and I’ll have them check out that tire then.

While the second UMC and Tire Repair kit were pricey additions to my Model S they helped lower range and trip anxiety and are welcome additions to my gear. There’s no other source for the UMC so you’re stuck with that cost but you may be able to save a few bucks if you get a repair kit from another vendor – just check that your TPMS won’t be damaged by it.