Nick Howe recently started a video blog with some great tips for the Model S based on his book and he always includes some relevant current news. In among the news he covers new Superchargers that have come online recently and that got me to wondering how I could get notifications of Superchargers as they come online and perhaps other things a little more automatically.

After looking around I didn’t find anything that fit the bill so I set out to create something to do that.

Warning: The following is a bit geeky. 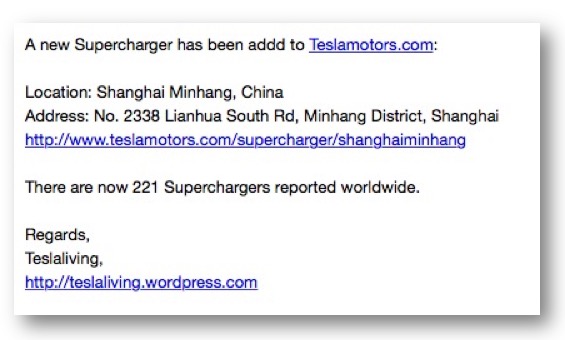 The definitive source for available Tesla Superchargers is the Supercharger page on Tesla’s site. Along with a bunch of other stuff, it lists each Supercharger, it’s address and a link to the details of that Supercharger. Unfortunately Tesla doesn’t date this page so you can see when the last update was and they don’t provide any idea of when things were added.

Using a trick called web scraping you can extract data from web sites and turn it into something useful for processing.

The tool I created grabs that Supercharger page once an hour, turns it into a computer readable format, and then extracts the list of Superchargers from the page. It compares the list to the last time it ran and reports on any new Superchargers with tweets and email alerts (1 per Supercharger found). Once a week it automatically reports on how many were found in the last week/month/year (or since it started monitoring).

For technology, I used the Python as programming language, cron for the hourly/weekly checks, and a 3rd party Python library called Twython for doing the tweets. The program runs on my Mac but is platform independent.

This approach is potentially brittle if Tesla changes that page significantly, but the code and technology is simple enough that it would just require updates to keep up with format changes.

If you’re interested in hearing about new Superchargers via your Twitter feed as Tesla posts them, feel free to follow me @Teslaliving. For now you’ll be subjected to my other Tweets but I promise to keep them all Tesla related 🙂

Tesla has an opaque software release strategy that can make you crazy if you think about it too much. Often you will hear about new software versions from other owners that are available that your car has not yet told you about. It can be days, weeks or even months before you get the welcome pop-up on your screen telling you of the update.

The best way to find out what versions are coming available are to head over to the Tesla or Tesla Motors Club forums and look for reports of new versions seen by owners.

Using an approach similar to the Supercharger one above I created email and twitter alerts for new version sightings:

I’m obviously a big fan of news sites like Teslarati and detailed blogs on subjects I care about, but I also want breaking news and a constant feed of information through Twitter to keep me up to date.

While i’d love to see Tesla’s social media group take on these sort of things there may be reasons they have chosen not to do so. In the meantime I hope these new informational tweets for those that choose to follow along are helpful.

I have other ideas for timely notices, so watch for more developments over time. Feel free to give me some ideas or suggestions in the comments below.

4 thoughts on “Getting notified about new Superchargers and Software Updates”